SAN FRANCISCO, CA – On the second anniversary of the passing of Mr. Choung Woong Ahn, his family and legal team filed a lawsuit in federal court to seek justice and accountability for his torture and wrongful death at an immigration detention center. Mr. Ahn was a 74-year-old South Korean immigrant who died in custody at the Mesa Verde ICE Processing Center on May 17, 2020, a facility owned and operated by The GEO Group, Inc. Mr. Ahn’s family, represented by Rights Behind Bars, the California Collaborative for Immigrant Justice, and Centro Legal de la Raza, have named Immigration and Customs Enforcement (ICE), the GEO Group, and the City of McFarland, California as defendants in the lawsuit.

Trevor Kosmo, an attorney at Centro Legal de la Raza, stated: “We are proud to represent the Ahn family in their pursuit of accountability. No family should have to experience the agony of losing a loved one behind bars. Mr. Ahn was an elderly man who suffered from serious medical conditions, and was separated from his family for years; instead of being released to the community, or receiving the proper care and treatment he deserved, he died alone in a solitary confinement cell.”

Though it was well-documented that Mr. Ahn suffered from serious physical and mental health conditions, ICE and GEO Group chose to place Mr. Ahn in solitary confinement. A complaint filed with the Department of Homeland Security Office of Civil Rights and Civil Liberties has gone unanswered. Meanwhile, California Attorney General Rob Bonta has taken no action to hold this private prison operator accountable.

“We know that solitary confinement is a form of torture.” said Lisa Knox, Legal Director at the California Collaborative for Immigrant Justice. “Mr. Ahn was tortured to death by GEO Group and this lawsuit is a step towards accounability for that torture.”

“Mr. Ahn’s case underscores a fact we know all too well: immigration detention is dangerous, and deadly,” said Oren Nimni, Litigation Director at Rights Behind Bars. “The physical and mental harms caused by detention cannot be overstated and fundamentally undermine any justification for continuing the practice.”

Ivan Oliva, who is currently detained at the GEO-operated Golden State Annex immigration detention center, added: “My heart goes out to the entire Ahn family. Since I’ve been detained by ICE at a GEO facility, I’ve suffered through solitary confinement, and been denied basic treatment for my medical conditions. This is torture, and ICE and GEO must be held accountable.”

The impacts of detention, including death while in custody, cause irreparable harm to families and communities. During this time of remembrance, Mr. Ahn’s family requests continued privacy.

A copy of the wrongful death lawsuit can be found here.

Rights Behind Bars works alongside incarcerated people to challenge the cruel and inhumane conditions of confinement through litigation and advocacy.

The California Collaborative for Immigrant Justice utilizes coordination, advocacy, and legal services to fight for the liberation of immigrants in detention in California. 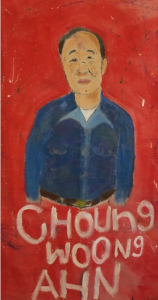