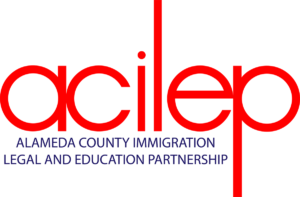 Oakland, CA — Today, the Supreme Court of the United States issued a decision allowing the Deferred Action for Childhood Arrivals (“DACA”) policy to continue. The Court held that the Trump administration’s termination of DACA is reviewable and that the Department of Homeland Security’s (DHS) rescission of DACA was done improperly and in violation of the Administrative Procedure Act. This victory is a testament to the fearless leadership, vision, and courage of dreamers who for years fought to end deportations, and pushed the Obama administration to issue DACA. It is a testament to the power of organizing and centering directly impacted communities.

We recognize that the Court’s decision comes at a critical time, as Black communities demand justice for years of violence and systemic and institutional racism. This moment compels us to act. We know the fight is not over and that our work must continue. ACILEP is committed to fighting for justice for all communities of color, including Black and Brown communities who are disproportionately impacted by racial subjugation, criminalization, exploitation and deportation.

Our mission is to ensure that all of our communities can thrive and live free from violence and injustice, in all of its manifestations. We will work to ensure that the Trump Administration does not renew its efforts to end DACA. We demand that DHS continue to accept DACA renewals, resume accepting initial DACA requests, and restore the program to its original state. Equally and unwaveringly, we stand in solidarity with our Black relatives and communities and support efforts to divest resources from policing and the prison industrial complex. We support transformative and community led-and-centered reinvestment approaches to improve housing, education, healthcare, employment and other sectors that will ensure the safety, well-being and collective determination of our communities. We call on local and state decision makers to divest in law enforcement, while simultaneously creating new laws, policies and alternatives to incarceration that include providing urgent reentry resources for our incarcerated loved ones and reparations for our Black loved ones.

We will continue to show up in the streets, institutions, and courtrooms until all Black lives are authentically centered, humanized, protected and sheltered. ACILEP and countless others across the nation are planning and participating in collective action events in our commitment to justice and liberation, following the inspirational leadership of undocumented and Black communities, who hold the wisdom and solutions.

“Today we celebrate all undocumented immigrants who have boldly and fiercely fought for DACA. We are inspired and motivated by their courage and reaffirm our commitment to fight alongside them. We know the machinery of criminalization and deportation continues to threaten black and brown communities, and are committed to working in solidarity with Black communities who are fighting for their lives.” – Aidin Castillo, Directing Attorney of Centro Legal de la Raza

“Thousands of DREAMers are working as doctors, nurses, teachers, social workers, and in many other positions that not only enrich this country, but also represent the diversity of our communities. We want to congratulate our young DREAMers and their families for their perseverance in fighting the systems of oppression under which we are living as minorities. We know that this is not the end of the fight, because these young people need a path to citizenship, as do more than 10 million immigrants living in the shadows because of unjust and immoral immigration laws. This victory is part of a larger effort to redefine public safety, to end police state-sponsored violence against Black and Brown communities, and to challenge voter suppression. We will continue organizing to ensure that every member of our community is counted in the Census, to ensure that our votes are counted at the ballot box, and to win full citizenship rights for all of us.” – Emma Paulino, Co-Director of Organizing and Leadership Formation, Faith in Action East Bay

“Congratulations to DACAmented immigrants for this historic win.  This moment would not have happened were it not for the Black uprisings that have centered Black lives in this country.  This decision is a welcomed reprieve for DACA recipients, and a call to action in support of Black Liberation. There are no permanent protections for any immigrants until African American human rights and dignity are protected.” – Nana Gyamfi, Executive Director of the Black Alliance for Just Immigration

“Mujeres Unidas y Activas celebrates the decision of the Supreme Court, which reflects the power that has been built through so many years of this fight for the DACA program. We thank the activism and the efforts of so many young immigrants and their familias, who built this movement. We recognize that this victory is for the whole family. Because DACA recipients are the realization of their parents’ dreams, who came to this country to give them better opportunities. We also want to encourage DACA recipients with our love and our support to continue to fight, all together, for the rest of our families. So that the whole family has the security of a life with dignity, together and in peace, without fear of the police, of immigration, of detentions and deportations. We must fight together, not only as immigrants but also alongside other People of Color in this country, against racial, social and economic injustice and against injustice based on gender, sexual orientation or immigration status. Today more than ever, we must fight together to end ICE and to end all police forces who want to erase the lives of people of color and erase the future of our children in this country.” – Mujeres Unidas y Activas